Kanya Kumari – The Abode of the Virgin Goddess

The confluence of water bodies is said to hold special significance for Sadhana, removal of Paapa and propitiating the Pitrus.

Especially significant are when 3 water bodies meet and are called Triveni Sangam ( though the one in Prayagraj is considered the most famous ).

In the Southern tip of Tamil Nadu , where the legendary Kumari Kandam (the purported original location of the Ancient Pandyas before it fell into the sea and the remaining Pandyas moved further inland ) was said to be.. 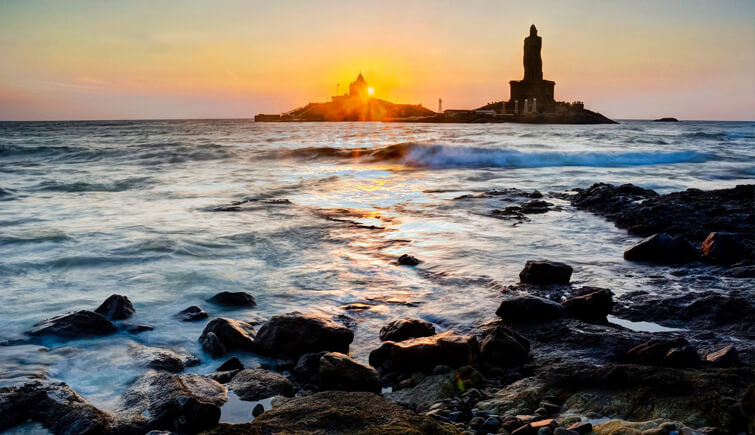 This place is a unique confluence of The Arabian Sea on the west, the Bay of Bengal or the Laccadive Sea on the east and the Indian Ocean in the south.

Many ancient epics have mentioned this location. In the Tirtha Yatra Parva of the Mahabharata , Deva Rishi Narada mentions the various Tirthas mentioned to Bhishma by Maha Rishi Pulatsya, and says that ,

“in the land of the Pandyas, one should bathe in the Tirtha called Kanya on the sea coast. O king of kings, bathing there one is cleansed of all his sins.”

It is also mentioned that this was the original place that Lord Shri Rama originally tried to built the bridge to Lanka and is also called Aadhi – Sethu.

Her temple is said to be over 3000 years old and Parashurama is said to be the one who had consecrated her Murti here and the temple follows a Kerala Tantrik style worship.

An interesting tidbit is that her nose-ring is said to be an encased Naga-Mani of a Cobra that shines so brightly that in the old days, ships were said to have been shipwrecked mistaking its light with a lighthouse, hence the door facing the sea was closed except on special occasions.

There is a rock at a distance from the shore where she is said to have done Tapas to Shiva called the Sripada Parai and it is where Swami Vivekananda did tapas before his journey to America.

Considered one of the powerful Shakti-Peeths, Devi upasakas are known to do the Sadhana there as well, to this Goddess.

P.S this location has been a target of mass conversion by evangelical groups for decades and the demographic has sadly shifted to majority Christians over the last couple of years.