Who Are The Pitru Devas ? Not What You Think!

Of the celestial Naga snakes I am Ananta; of the aquatic deities I am Varuna.

Of departed ancestors I am Aryama, and among the dispensers of law I am Yama, lord of death.

Aryaman , one of the 12 Adityas (identified as the Sun) is said to head the Pitru Devatas. In other texts it is mentioned that Yama heads them.

A curious link is that Surya Deva , also identified with the term Aditya, is known to be the father of Yamaraj.

Once when Brahma started his cycle of creation , the Devas were created to worship him..

and the Manavas (humans), to worship the Devas. Hence there was balance within creation.

However the Devas soon realized the benefits the humans were getting, in worshipping them ( the Devas)..

So the Devas started worshipping each other instead, putting creation into disarray. 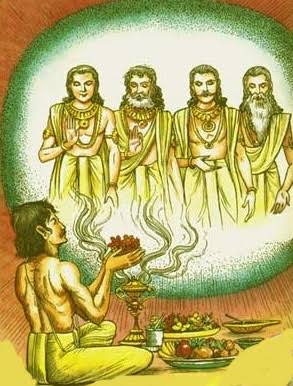 This enraged Brahma, who cursed the Devas to lose their Intelligence and move around creation in delusion.

The Devas begged Brahma for a remedy for which Brahma said to seek their sons, the Pitrus.

The Devas humbled themselves and went before their sons, The Pitrus for help.

The Pitrus , full of virtue , piety and self control, gave upadesha to the Devatas, relieving them of their deluded state and giving Jyana.

The delighted Devas, who regained their old selves said to the Pitrus, indeed you are like our fathers, for you have blessed us with Jyana and Dharma.

Brahma said, henceforth you will be known as the Fathers of the Devas too. and thats how , the Pitrus who were the sons of the devas, became the fathers , of their own fathers.

It is said when one offers obalations to our Manushya Pitrus ( our departed ancestors ), it actually goes to these Deva Pitrus ,

who ensure that our ancestors are relieved of their burdens.

Doing Bhojanam (feeding, annadhaana) is a sashtra approved way of making these Pitru Devas happy and shower their blessings on us.

As per Brahmanda Purana, feeding one who is knowledgeable in mantras (mantrajnas) is equal to feeding 100, 000 ordinary Brahmanas,

feeding an initiated householder (snataka) is equal to feeding many, conversant in mantras.

And Feeding 1 single Master of Yoga, is equal to feeding a thousand mantrajnas or a 100 snatakas. (Brahmanda Purana)